Before North Carolina’s rough 14-19 finish last season, the Tar Heels were ranked No. 9 in the preseason AP college basketball poll and were up to No. 5 by Nov. 18.

This season, with the influx of freshman talent to go with preseason ACC player of the year candidate Garrison Brooks, the prospects for UNC are much better. Despite that, Carolina is only ranked No. 16 in the preseason poll that came out Monday.

Clearly, many voters want to see how the Tar Heels rebound from that forgettable season.

UNC has been in the preseason poll in 50 of the last 55 seasons since 1966. This is the 924th time the Tar Heels have been ranked in the AP poll, more than any other school. Kentucky is second at 919. Carolina has been ranked at some point in 64 of the 73 seasons of AP poll history.

In yet another strange 2020 twist, the release of the AP preseason poll comes before the ACC releases the schedule. That is scheduled for 9:30 a.m. Tuesday. For a reminder of what we already know about the schedule, read this story.

The ACC Men’s Basketball Schedule will be announced tomorrow at 9:30 am on @accnetwork. pic.twitter.com/oge4wjGDhI

Gonzaga is preseason No. 1 for the first time in program history, followed by Baylor, Villanova and Virginia. No. 4 is Virginia’s highest preseason rank since the 1982–83 season.

Other ACC teams in the poll are No. 9 Duke and No. 21 Florida State.

Ranking UNC the highest at No. 11 is John Werner of the Waco Tribune-Herald, followed by John Feinstein of National Public Radio, who had the Tar Heels No. 12.

The Tar Heels remember the pain of last year and expect better results this season. Much of that hope comes from a talented group of freshmen who give them plenty of talent and much more depth with the return of Brooks, Andrew Platek and Leaky Black. 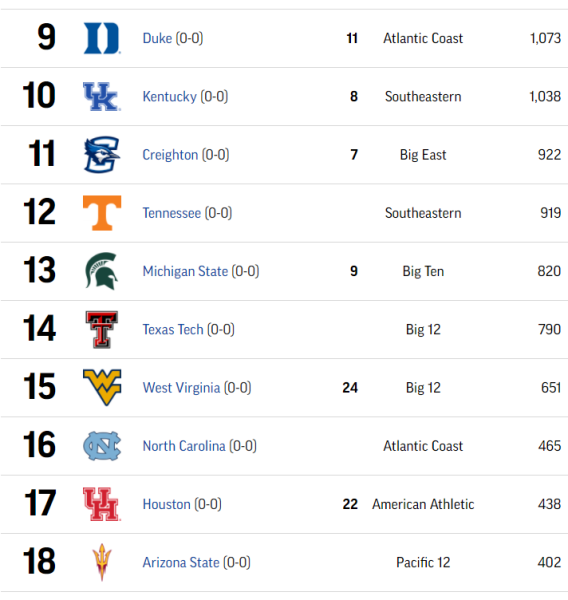 View all posts by R.L. Bynum